The History Behind It All

Iconic and an Important Tradition

The Wigwam: A Look Back in Time 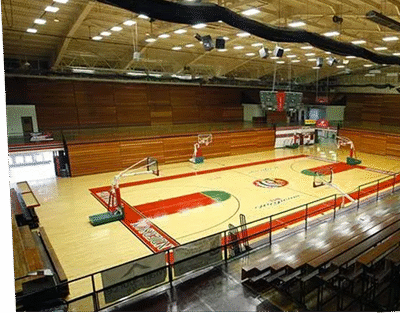 The Anderson High School Athletic and Educational Building, forever known as the Wigwam, opened in November 1961, and replaced the original arena which was destroyed by fire 3 years earlier. The arena sat 8,996, and was the second largest high school basketball arena in the state of Indiana. In 1979, an addition consisting of an academic (classroom) wing and an auditorium wing was connected to the Wigwam.

The Wigwam as originally designed combined a basketball gymnasium with facilities for industrial/vocational training, swimming pool, school cafeteria, and full-scale stage for multiple school and community events. It also exemplified innovative engineering and architectural concepts, with the structure for the gymnasium consisting of large, self-supporting steel beams and columns, so that views of basketball games would be unobstructed by interior columns. The exterior curtain wall and roof were constructed of light-weight and non-rusting aluminum. The facade (south elevation) of the Wigwam as originally designed was almost completely symmetrical, and its focal point is an impressive colossal ceramic portrait of an Indian chief.

The 60s, 70s, and most of the 80s were its glory years. Some notable events included:

The architect for the Wigwam was Arthur B Henning. The Anderson High School Wigwam also illustrates the rapid advances in engineering design for large gymnasium structures during the 1950s in the United States and is an excellent example of characteristics of New Formalism and Neo-Expressionism, two trends in Modernism, applied to a gymnasium. Wigwam represented the latest design innovations in gymnasium design—nine 200-foot high tensile steel beams with rigid frames supported the roof structure to permit clear views of the playing floor, and aluminum curtain wall panels were used to cover the exterior walls for lightness of weight.

Help make The Wigwam community project a success and donate!

Donate to The Wigwam